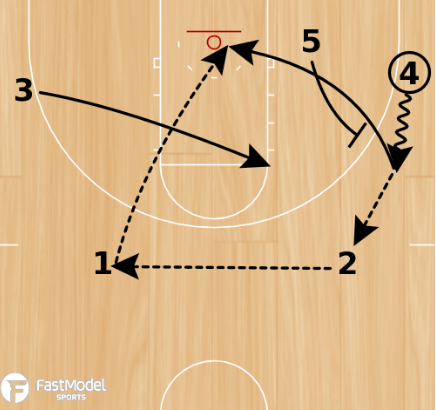 This play was originally featured on FastModelSports.com.

Here is a quick zone hitter from Wichita State used to create an open lob. The play starts with a ball reversal and a pass to 4 in the corner. Once 4 gets the ball, 5 steps to the short corner looking for a shot. If 5 isn’t open, 4 dribbles up to the wing bringing the zone defender up with him. 4 then passes to 2. At that time, 3 flashes to the high post taking the attention of the zone defenders. 2 quickly passes to 1 as 5 slips behind the zone defenders to set a back-screen for 4. 1 looks to make the lob pass over the top of the defense to 4 for a dunk.